all photos are the property of the blog, Voyages of the Backyard Explorers & are not to be used/reproduced in any manner

When I decided to officially split my blog and start the Backyard Explorers, I knew I wanted to review So Awesome’s wallet and wallet cards. I had wanted to feature them on my blog The Whimsical Mama under my Tot Time Thursday meme, but since my main focus is on young adult things, and I wasn’t thrilled with how Tot Time Thursday was going, I was afraid the review wouldn’t be well received or appreciated. Once I kicked off this blog, I reached out to Marie-Claire about being featured on the blog.

I fell in love with So Awesome’s products when they were featured on Imagine Our Life‘s blog back in fall 2014. I have fallen even more in love now that I have them in my hands.

Marie-Claire let us pick which deck to review. Punk wanted the alphabet and Bug kept pointing to the colours & shapes deck, saying, “Please!” Mama had to cast the deciding vote. I decided to pick the alphabet deck. Punk can always use an alphabet review and Bug is picking up letters as we go, so they’ll be a great teaching tool for her! Wallets were out of stock when we discussed which deck to review. I made a mental note to order one when they came back in stock.

I was pleasantly surprised when I opened the package and found a wallet included with the alphabet deck! I decided to fully investigate our goodies before I turned the kiddos loose on them.

All of So Awesome’s products are durability tested, but I wanted to see them before kiddo gook started to accumulate! (: Punk is learning (slowly) about money through earning tokens for various things he’s picked. He’s currently working to earn this: LEGO Juniors Fire Emergency

. He’s also asked for a wallet to keep his “dollars” in. So that combined with learning about money is why I was keen on the wallet for Punk. Both kiddos love to play store/restaurant and pretend money does not last long with a 3 1/2 year old and 2 year old fighting over it! Bug is obsessed with emptying the contents of my wallet as frequently as she can ninja my wallet from the diaper bag or my purse. She also delights in rearranging things in it. I was looking at the wallet for her as a distraction ploy. If she has her own, maybe she’ll leave mine alone! (I can hope, right?!)

We received the black and white wallet, but you can also get the wallet in mint/chocolate or saffron/mandarin. The wallets are constructed by the USA company, Drifter. 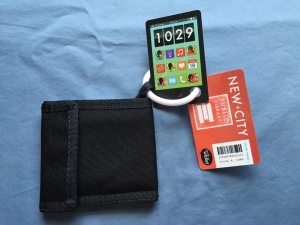 The wallet comes with play money. This is no typical play money. It’s designed to stand up against rough play. I love how brightly coloured it is! Would it be more educational if it looked like real money? Most likely, but I prefer it to be how it is. We still have some regular pretend money for realistic exposure. Another thing I love about the money? It has the number in multiple languages so you have culture exposure at the same time! Personally, I love the French exposure the most. (: 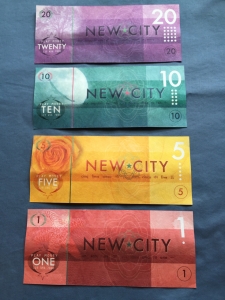 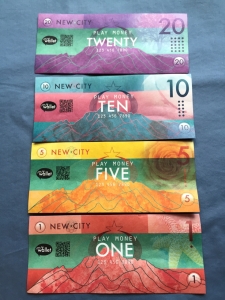 The back of the money is my favourite! Isn’t it beautiful?

It also comes with cards. They’re constructed similarly to real credit cards and are extremely durable. To see everything that is included with the wallet, click here. 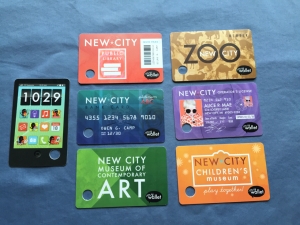 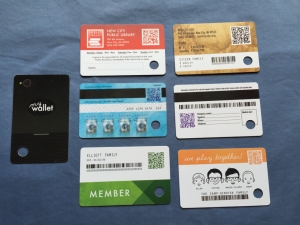 My one complaint with the cards is they aren’t personalised to the child receiving them. Each card has a name on it though. I’m sure personalising would be far too expensive and time consuming, so it’s a minor complaint with me. My kiddos don’t mind and haven’t really noticed. It’s purely a Mama wish. I might see if a DIY fix is possible. Or (most likely) leave them as they are.

There were some other wallet goodies included too. 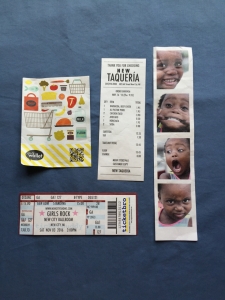 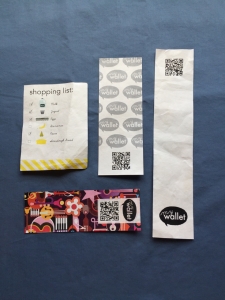 Punk has claimed the grocery list as his. Like I said, they LOVE playing store. Their quality is incredible.

The alphabet deck is gorgeous in person.

One side has beautiful colour illustrations and the other side has the word of the illustration, a large lowercase letter, and small illustrations of other words that begin with that letter. 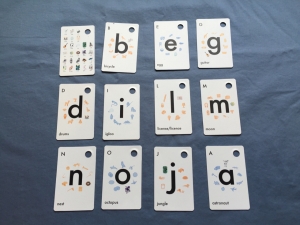 These are some of our favourites!

Punk thoroughly investigated the cards twice after getting them. He had first dibs on looking since Bug was still napping when the package arrived. He took great care to point out each letter and picture to me. 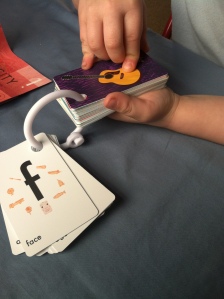 Punk absolutely loved seeing the astronaut and drumset cards. He loves all things space  and his daddy is a drummer. He kept saying, “I can’t wait to show these cards to my daddy!” When he saw the igloo card, he asked if he could live in it. The N card was a big hit too. We have a bird’s nest in one of my hanging baskets and Punk said, “Look, Mommy! A nest like in your flowers!” He also loved the debit card at the end. He asked if he could buy things now. 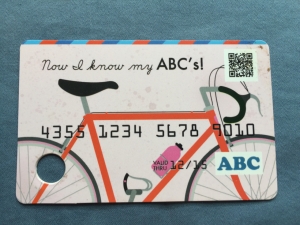 The alphabet cards are built like the wallet cards. They’re very sturdy and are sure to hold up to chewing, pulling, fighting over, and hard playing. The cards are on a removable ring. It’s perfect to hook on a stroller, bag, or carseat. Easy to play with, but hard to drop while attached! I know they’ll be thrown in my bag anytime we leave the house now! Another great thing about the removable ring is you can take the cards off and look at them individually. So Awesome offers single replacement cards in the event you misplace one. I’m sure I will be using the replacement cards at some point!

Bug was immediately drawn to the wallet, the iPod/iPhone card (she “called” all the grandparents), and the play money. She gave me $30 as soon as she pulled the money out. She’s also already tested the durability by taking a few nibbles! (The nibbles have been on EVERYTHING. She’s definitely interested in quality control haha)

She also loved investigating the alphabet cards. She brought them to me and said, “Pretty!” She also told me what a few of the pictures and letters were.

There have already been a few scuffles over the wallet, so I’ll definitely be ordering a wallet for Bug! She picked the mint/chocolate. Since I’ll be ordering a wallet, I’ll also get the shapes & colours deck for her. (: Included in our goodies were picture samples of the other decks. Hands down, the colours & shapes deck is the favourite of the decks we don’t have! 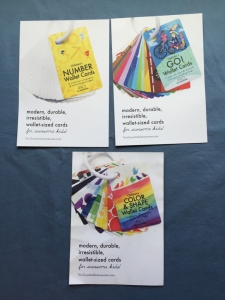 If you’re interested, you definitely should check out the incredible wallet and sets they have now and the new decks on their Kickstarter. You can see the Kickstarter here. I am super excited about the seasons deck. All of the new decks look amazing and they’re still in the mock up stage.

There’s also a FREE iOS app that goes with the wallet. I’m looking forward to checking it out with the kiddos. I thought I had loaded it on Punk’s iPod, but I hadn’t. It’s now loaded on his iPod and my iPhone. Keep an eye out for a review on it soon!

I am SO thankful that Marie-Claire allowed us the opportunity to review the wallet and alphabet deck.